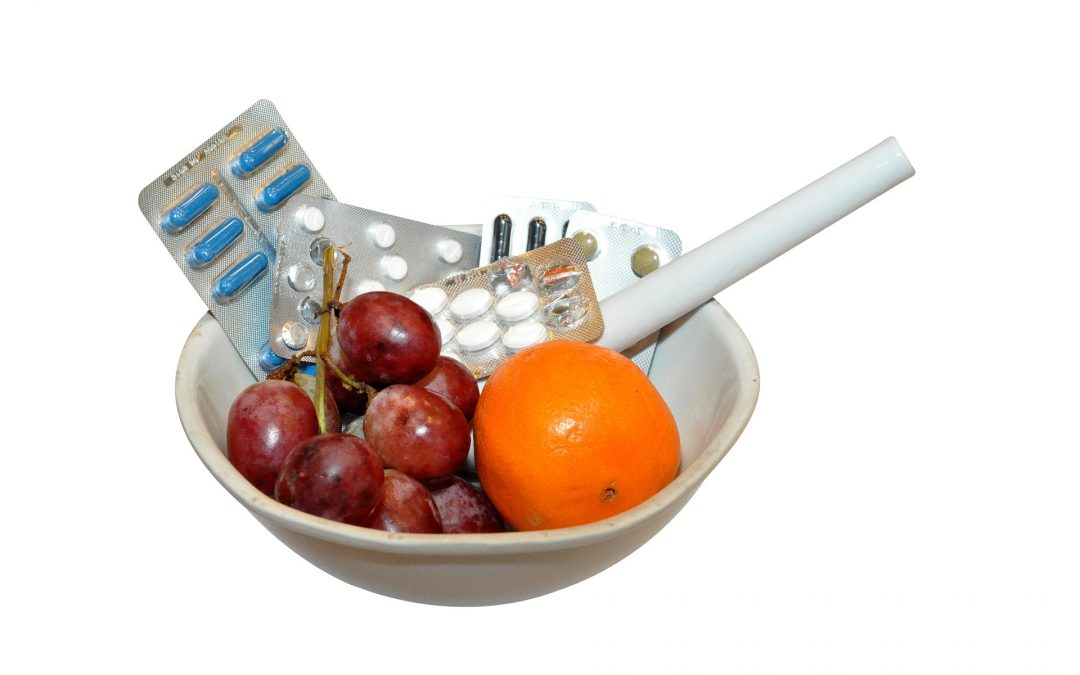 How many of you are aware that for every food supplement which derives its vital nutrients from food sources, there are many more which use nutrients manufactured in a laboratory?  And should you care?  Is it an issue?  When is a vitamin not a vitamin?

To fully understand the differences and implications of this it is best to take a course in biochemistry, as it is a complex and still relatively poorly understood topic.  But in the absence of this being an option, I will attempt to simplify it for you into a few key points.

A synthetic vitamin in most cases has the same molecular structure as a natural vitamin, but that is where the similarity ends.  Mother Nature, in her infinite wisdom, has put a whole-food vitamin together complete with cofactors, enzymes and other components that the body generally needs in order to make best use of said vitamin.  Whole-food vitamins are actually groups of chemically-related compounds that cluster in the foods we eat, and form a complex matrix that nutritional science is still trying to understand.  A synthetic vitamin involves making a molecule that is one component of a large whole food molecule – the same molecular structure maybe, but lacking the matrix within which it should sit.

Now ask yourself, will this do exactly the same thing in the body as the whole food vitamin.  Well, how can it?  It needs that matrix to work effectively.  So it will have to go ferreting through that body’s store cupboard of nutrients to find the co-factors, enzymes etc it needs, depleting the body’s resources or….it will simply be unable to be used and the best case scenario is that it will be excreted.

The basic principle is that Nature never makes a nutrient that is found by itself, in isolation. Let’s look at few examples to make more sense of this:

Vitamin C found in many fruits and vegetables, contains the following components:
Rutin, bioflavinoids (Vitamin P), Factor K, Factor J, Factor P, tryosinase, ascorbinogen and
ascorbic acid.
Synthetic Vitamin C is made up of ascorbic acid.  Not quite the same thing is it?  Nor does the body think so.  People with scurvy have been fed just ascorbic acid and the scurvy (a disease caused by lack of Vitamin C) did not improve much, those fed the whole-food Vitamin C complex had the scurvy eliminated.

Or Vitamin A, which is associated with:
retinols, retinoids, retinal, carotenoids, carotenes, fatty acids, vitamin C, vitamin E, Vitamin
B, Vitamin D, enzymes, minerals
Synthetic Vitamin A is made up of retinol, retinal or retinoic acid.  Isolated from these other factors, Vitamin A on its own cannot perform its biological functions in the same way, and in fact has been associated with toxic effects in high doses.

The same for beta carotene, a precursor to Vitamin A which the body can convert.  Almost all synthetic beta carotene is made by the drug company Hoffman-Roche and is stabilised in refined vegetable oils, also known as trans fatty acids.  At best it is worthless to the body, at worst potentially toxic.

So many of the contradictory reports you read about in the paper which says Vitamin A is good for you one week, then bad for you the next, or helps with hypertension, then no it doesn’t, can be put down to some studies using whole food versions of a nutrient and getting good results, then other scientists trying to replicate these results using (wittingly or unwittingly) a synthetic version and being totally unable to do so!  It does make for a confusing world, doesn’t it!

As a consumer you have got to learn to be a little savvy and read labels in order to understand what it is you are really getting.  If you want a vitamin tablet, made with synthetic ingredients you have every right to buy it, it’s just you should know that is what you are getting.  There are plenty of more expensive supplements which are made with synthetic ingredients, and even have ‘Made with natural ingredients’ on the label, as food labelling laws allow this to be used when only 10% of the product come from natural food sources.  Instead you are looking for ‘100% natural’ or ‘100% plant-based’ to get what you think you are getting.  Other phrases used to describe these are ‘food state’ or ‘whole food’ supplements.

Another way to identify synthetic ingredients is to look for key words on the label.  Anything ending in ‘ate’ or ‘ide’ indicates that the product contains salt forms of the nutrient, which are synthetic eg.  Acetate, palmitate, nitrate, chloride, hydrochloride.  In addition the prefix ‘dl’ before an ingredient also indicates it is artificial ie. dl-alpha tocopherol.

Are you still with me?  Yes, I know it is enough to make you glaze over!  How on earth is the poor consumer supposed to wend their way through this minefield?

Let’s look at what an expert is this area says.  Nutritionist Juduth DeCava states:
“Separating the group of components (in a vitamin complex) converts it from a physiological, biochemical, active micronutrient into a disabled, debilitated chemical of little or no value to living cells.  The synergy is gone”[1]

So what does this mean when it comes to choosing a good supplement?  Well, the potency of a supplement has far more to do with synergy, rather than actual nutrient levels – it is the combined effects that are important rather than a single part.  If a supplement has to diminish the body’s stored supplies of essential nutrients in order to be processed how potent is it really?  No matter what is says on the label!

So, the gold standard in this respect will be supplements that are 100% derived from food sources – they will contain that elusive synergy that makes it more than the sum of its parts, and will be welcomed by the body as an old friend, because millions of years of evolution have ensured that our bodies know what to do with it.

I see the choice being very straightforward – the miracle that is Mother Nature, or the man in the white coat.  Clever as the man might be, Mother Nature gets my vote every time!  She has secrets we are only just beginning to penetrate, including that magic ingredient that scientists are working hard to discover, but so far have failed to do so – synergy!

[1] DeCava, Judith.  The Real Truth About Vitamins and Antioxidants. 1996

This website uses cookies to improve your experience while you navigate through the website. Out of these, the cookies that are categorized as necessary are stored on your browser as they are essential for the working of basic functionalities of the website. We also use third-party cookies that help us analyze and understand how you use this website. These cookies will be stored in your browser only with your consent. You also have the option to opt-out of these cookies. But opting out of some of these cookies may affect your browsing experience.
Necessary Always Enabled

Any cookies that may not be particularly necessary for the website to function and is used specifically to collect user personal data via analytics, ads, other embedded contents are termed as non-necessary cookies. It is mandatory to procure user consent prior to running these cookies on your website.

Before you go, I'd love to stay in touch!